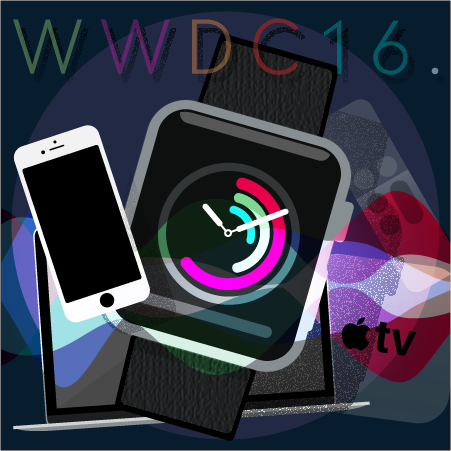 Last week was the annual Apple WWDC keynote address, and it was a big week for us all! We learned about upcoming releases for all four major platforms: watchOS, tvOS, macOS, and iOS. As with every WWDC keynote, there are a number of important announcements - check out our recap and opinions on the top points for each platform.

A majority of these updates are available to developers now, will be in public beta next month, with full releases this fall. As always, we don't recommend installing the developer release or public beta on your primary devices, since the bugs are still being worked out and any number of things could go wrong.

The Apple Watch is about to see some incredible updates with watchOS 3. Most of the complaints about the Watch have been slow launch times and difficulty finding recent apps on the home screen. Both of these issues will be improved in watchOS 3, with much faster app launch times, and a Dock for switching between the most commonly-used apps.

For situations where dictation can't be used (or for people like me who just feel ridiculous talking to their wrist in public), Scribble was introduced as a new way to write out text using your finger to respond to messages quickly, without having to feel silly.

Additionally, there are a number of new watch faces, which can be changed with a swipe. Control Center has been added, with some of the same functionality as its iOS counterpart.

On the health side of things, the Activity app has been improved to allow sharing of activity details with your loved ones. Apple also greatly improved the Watch for wheelchair users, with improved reading of arm movements and two dedicated wheelchair workouts—not to mention changing the "time to stand" notification to "time to roll." There's also a new Breathe app to guide deep breathing exercises with haptic feedback.

Finally, there's a new feature we hope none of us will have to use: SOS can be invoked by holding the side button on the Watch, which will call 911 (or the local equivalent). The Watch will then send a message to your emergency contacts, and display medical information from the Health app on your iPhone. Again, this is the kind of thing we all hope we'll never need, but it's great to know that it's there in an emergency.

For screenshots and additional details, check out the watchOS preview page.

This fall will bring some welcome improvements to tvOS. The most significant is Single Sign-On, a new option to sign into your cable provider once, instead of doing so in every app for each network you want to watch.

The corresponding Remote app on the iPhone will get the full features of the Siri remote, in addition to showing more information about what's currently playing on the TV. Siri is now more helpful, with things like searching YouTube or switching to live broadcasts. Games are no longer required to work with the Siri remote, which means better options for gameplay.

OS X is now called macOS, which certainly fits a lot better with the rest of Apple's product line. The next release, macOS Sierra, will include iPhone functionality that we are all familiar with, and improved interoperability between Macs and iOS devices. For example, the Mac now supports Siri, and based on the demo, it's a more powerful version than we've been using. For example, you can use Siri to search for files, then further refine the search by invoking Siri again to narrow the results.

Macs will play nicer with iOS devices with shared clipboards (copy on one, paste on the other) and Apple Pay support, which will require payment authorization from the Watch or using Touch ID on the iPhone. iCloud Drive improvements will make it easier to use your files anywhere by syncing your desktop, and optimized storage will reduce unnecessary disk usage.

This was the big one. Apple laid out ten new features and improvements in this version.

Beyond all of that, they also announced Swift Playgrounds for iPad. There had been a lot of speculation about the possibility of Xcode and/or Playgrounds coming to the iPad, and it seems like Apple went with the best possible route. The app is primarily geared toward teaching basic programming concepts, and includes lessons that are very similar to an updated version of Logo: you write code to move a character around a world to achieve some goal. Kids are going to love playing with this; like a lot of programmers watching the keynote, all I could think was how excited I would have been to see those playgrounds when I was 12 and just beginning to understand what I could make computers do.

This is truly a big year for the Apple ecosystem and those of us who use and build for it. We're excited to see how all of these new features come into play in the apps we create and use every day, and this is all just from the keynote—WWDC is a full week of sessions that include all sorts of exciting nuggets for iOS developers. We’ll be learning about updates to iOS all week and beyond as we watch session videos and review updated documentation.