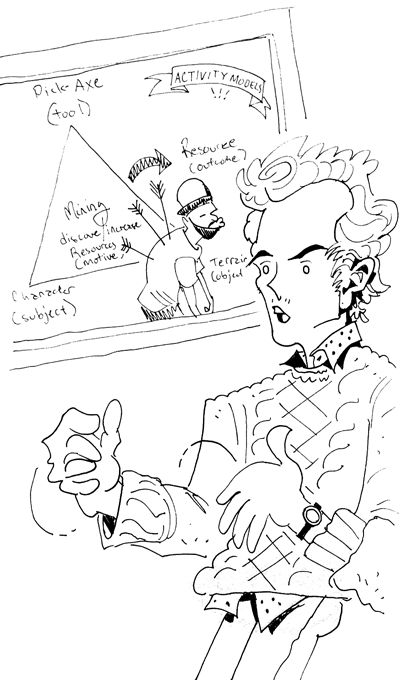 For this week's Lunch & Learn, Interaction Designer at VOKAL, Brian Flavin, applied his user experience know-how to the world of game experience and engagement. Brian kicked off with a high level definition of HCI and its relation to game engagement. Applying the objective of Traditional Human Computer Interaction, which is focused on the facilitation of user-defined tasks, and comparing this to the objectives of game engagement, which is based on value systems attributed to the player (or as Brian revealed, his value of launching arrows at the heads of his enemies), he concluded that game design is rather, evaluated from an HCI perspective, by measuring the value a player gains from participation in a game. i.e. The Value Systems Theory.

From here Brian showcased a few example activity models to initially define a player's motivations in a game. Activity models help to categorize user motives and define what is considered to be valuable to a player. Similarly, principles of game design can be used to form the user experience of a game. This was broken down into some key principles including direction, behavior, progression, environment, method, foundation and engagement. Likewise, a user (or player) engagement is created through the use of game mechanics in the game design process. After a brief analysis of some key game mechanics along with some choice images of Minecraft in relation, Brian brought it all home. Through the understanding of these principles & mechanics that create player experience / engagement, HCI professionals have been able to conduct studies to evaluate how (and why) a game is successful or not.